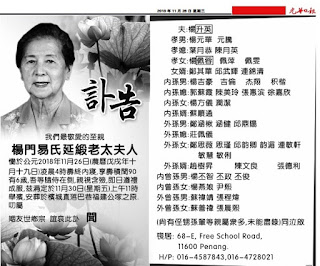 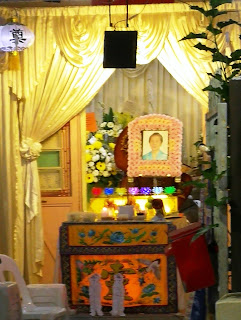 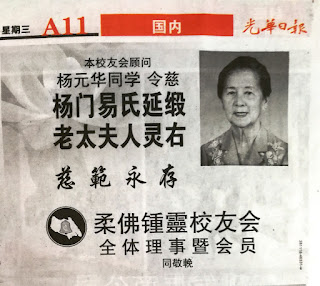 Posted by huctan at 8:41 PM No comments: 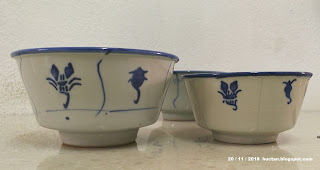 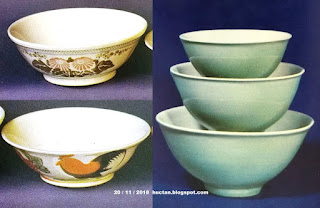 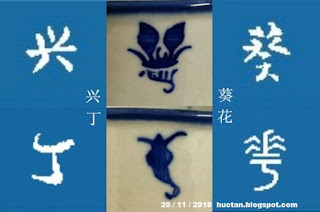 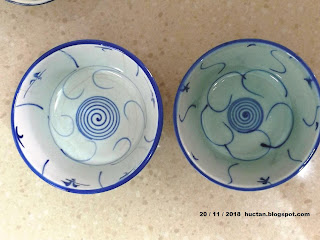 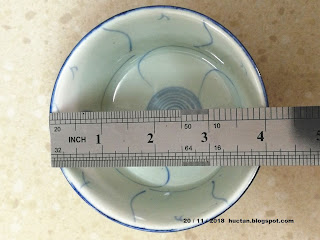 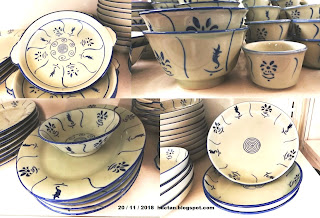 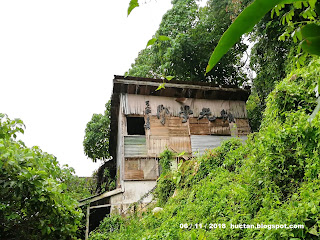 
The “Bin Guang Xue Yuan / 檳光學院 “which was hidden in the mid-level of Penang Hill was named “Hillview Institute“ in English .It was a private higher education institute / college that provided Chinese teaching and inherited Chinese culture. Three great persons were involved in the history of the college. 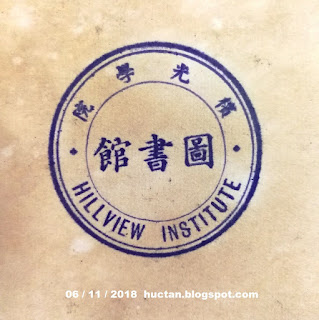 
The first person was the landlord who has prestige in the Chinese community of Penang and ownership of this land, the late Mr. Ong Keng Seng (Appendix 1) 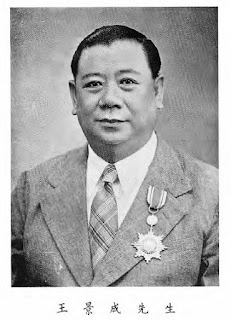 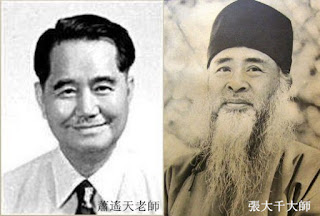 
According to Mdm Ong Keat Bin, the granddaughter of the late Mr Ong Keng Seng, the garden villa that was rented to Master Xiao as college  had an English name,  called  “ Green House “, of which it was a good place for the Ong’s family members to relax and enjoy their leisure time on the Penang Hill. 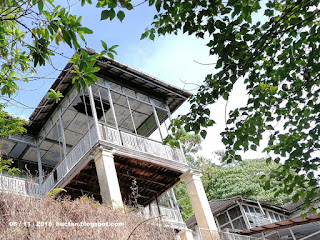 
After a few years of operation, the college was forced to close. The reason was due to the change of Chinese education policy in Malaysia and the decline in the intake of students (majority from Thailand). 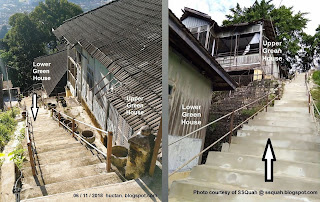 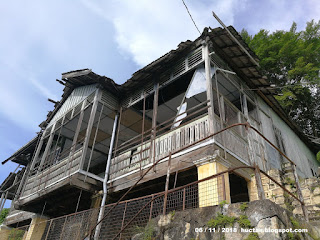 
Since then, the two independent wooden bungalows built according to the hill slopes have been abandoned for a long time, several rooms have been collapsed. 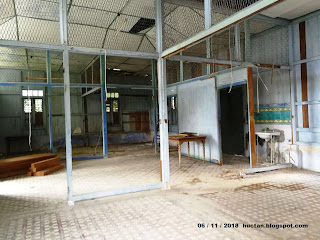 
It turns out that the grandchildren of the late Mr Ong have an attitude of gratitude.  In order to reminisce on her grandfather’s achievements,   she promised to let the two remaining bungalows  of ” Green House  “remain intact. Currently renovation is in progress in converting the bungalow to a Buddhish meditation retreat as named “Penang Passaddhi Retreat and Meditation Centre “. 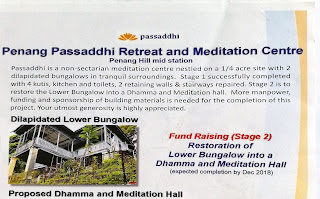 
May I wish Keat Bin and her husband Mr Cheong Peng Yan with the joint efforts of the members of Ong’s family and those who are interested and helpful will accomplish this task as scheduled.
In deep grief, Master Xiao Yao Tian wrote a mourning to show the deep friendship between both of them and praised the late Mr Ong’s enthusiasm and kindness. (Refer to attachment) 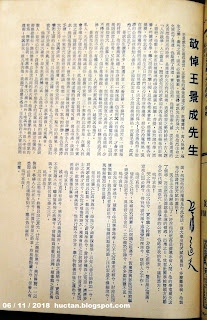 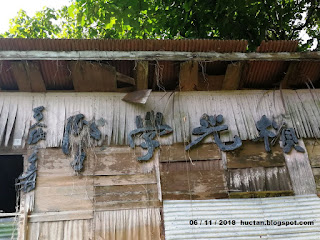 
Most people / hikers walked through this bungalow will not be aware of the treasures left on the wall.
Generally known to the public, to request a famous artist to write a high quality Chinese calligraphy for shopfronts or signage is high in price, it costs hundreds to thousands of dollars.
During the 1960s, everybody knew about the Chinese Painting artist, Zhang Da Qian.  From the signage  of the college with Zhang Da Qian’s inscription, one can see how good their friendships are. 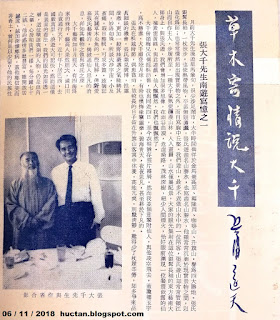 Master Xiao’s literature [Da Qian Memories of South Tour] noted: During Zhang stay in Penang, he was occasionally suffering from a slight sickness. So most of the time he was staying in the guest house,   ” Green House  “on Penang Hill to restore his health.  (Excerpt from the monthly Teaching and Learning magazine, Volume VI, Issue 4).


Learned from the text, Master Zhang was stayed in the “ Green House “ and being accompanied by Master Xiao,  visiting  various places with stunning mountain and sea views all round Malaysia and Singapore. From here they established a sincere and profound friendship. 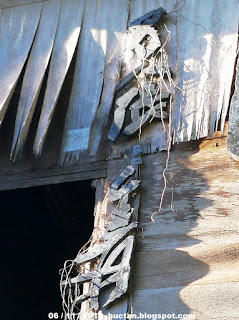 Cut and bent copper metal on Chinese character blocks of the “Bin Guang Xue Yuan “were arranged in a right-to-left direction according to traditional Chinese character order. The signature of Zhang Da Qian was arranged from top to bottom in vertical line.


Although after decades of sun’s radiation and pouring rain, most of the letter blocks are firmly fixed on wall.  There are a missing of the vertical letter block, “大  “and a minor deficiency of horizontal word “檳, 院 “but the disfigurement is not serious. The Chinese characters, “Bin Guang Xue Yuan “can clearly be seen from a distance.
Once the dry grass and the rust on the surface of the letter blocks were removed, the Chinese calligraphy will emerge its traditional arts and beauty with shining and extraordinary splendor. 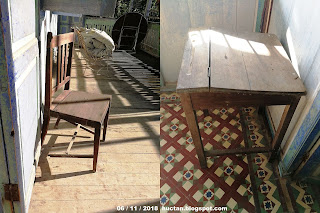 
A shock bringing imagination back to the schooling time, we turned into a student, sitting on a separate wooden desk and chair made half a century ago, listening to the teaching of Master Xiao. 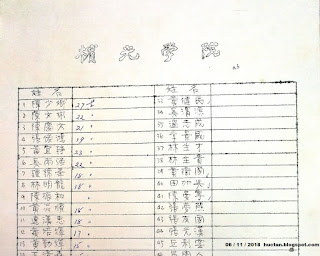 The late Mr. Ong Keng Seng (1898 ~ 1963) was born in Penang on 1898 and died in 1963, a Chinese of origin from Fijian Province Tong An District ,
In Malaysia, especially in the Chinese community of Penang, he was well-known for good reputation and big businesses.
At early stage, he received Chinese education at Penang Chung Hwa Confucian School.
Growing into the business world, he founded Datong Rubber Company.  In the film and cinema industry, he took over the ownership of Xian You Theatre and renamed as The Majestic Theatre. He was a smarter person who talked less, always treated people with sincerity, kind and helpful.
He was enthusiastic about public welfare, especially devoted to Chinese education and sports activities. Several fundraising for charity and non-profit organizations in Penang were greatly depended on the kind efforts of the late Mr Ong Keng Seng.

After the end of the 2nd World War, he was awarded with the medal of victory in the Chinese Anti-Japanese War for his efforts in fundraising and disaster relief during the Japanese occupation of Malaya.
He was also appointed as a member of the Overseas Chinese Affairs Committee of Overseas Chinese National Congress of Malaya.
He has served as the three peripheral institutions of the Chinese Nationalist Party for several decades: Chairman of Sun Yat Sen Museum Penang, Chung Ling School to commemorate Sun Yat-Sen activities and Kwong Wah Yit Poh Press.
In order to serve the society, the Yang di-Pertuan Agong and the Governor of Penang have conferred him with highest titles in recognition of his contributions to the country and society.

Posted by huctan at 7:38 PM No comments: 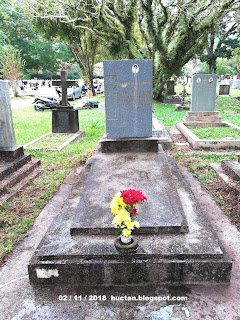